MICO (August, 15th, 1988) is a Fukuoka-born artist, performer, meditation master and costume designer. She created an ancient ritual at Performance Painting. She characterizes a various technique & material, especially mineral stones by a theme. Extemporaneously illustration expresses from the past to the present to the future of the person. From the childhood period, she had a strong interest in a metempsychosis which she learned from a mythology. She starts to create her own imaginary worlds, universes, goddesses, spirits, and fairies. At age 10, she made a vow to dedicate herself to the goddess of the moon as an artist. From the age of 15, she spent approximately 10 years in Canada, the US, and London studying film, theatre performance, and art. She later attended Central Saint Martins at the University of the Arts London where she further developed her talent in performance design, including live performance, opera, dance, film, costume, stage set design, make-up and stage direction. After returning to Japan in 2012, she incorporated Japanese traditional arts and culture. Since 2013, she presented her ancient ritual art and displayed her Performance Painting to the world. She was inspired by the energy of the buddhist art goddess, Gigei-ten, during Jiutamai Master Hanazaki Tokijo’s traditional dance performance of dedication at Itsukushima Shrine in 2014. The following year, she produced and presented her Performance Painting Itsukushi no Kimi. Her works displayed at the Tokijyo Hanasaki New Training Institute. Her energy of the goddesses synchronization performance, MICO MAI Spectacular Spectacles opened in 2015. Her opening performance was held in Aoyama, followed by performances and workshops which were hosted nation-wide. She joined Japan Expo in Paris in July 2016.
She dedicated her Performance Painting of the buddhist art goddess, Benzaiten and the performance of pray at the dedication ritual at Hogon-ji Temple on Chikubu Island on August 15th, 2016. She was chosen to be a first dedicator for the Japanese ancient goddess, Princess Seoritsu by Master Japanese Mountain Ascetic Hermits 13th from the Three Mountain of Dewa. It will be happening in August. The most famous historical school of Japanese painting, Kano school, Master Kano 20th gave me the permission to be called Kano. Kinobu Kano (狩野桔信). She returned to London for teaching her Golden Gift Meditation before dedication. 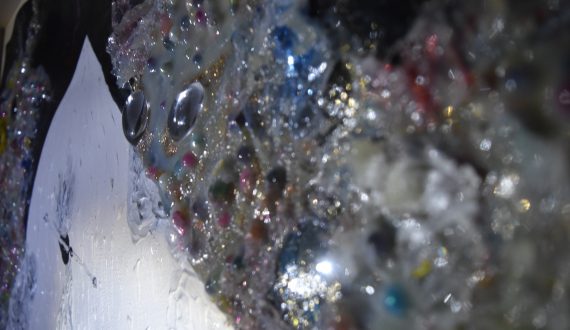